Union Pacific 3985, also known as the Challenger, is a four-cylinder simple articulated 4-6-6-4 Challenger-type steam locomotive built in July 1943 by the American Locomotive Company (ALCO) of Schenectady, New York, for the Union Pacific Railroad. #3985 is one of only two Challengers still in existence and the only one to have operated in excursion service.

#3985 operated in revenue service until 1957. It was then stored in the roundhouse in Cheyenne, Wyoming, until 1975, when it was placed outdoors beside the Cheyenne depot. In March 1981, after a group of Union Pacific employees restored the locomotive to operating condition, it was placed into excursion service as part of the Union Pacific’s heritage fleet and became the world’s largest operational steam locomotive. Mechanical problems took it offline in 2010, after which it was stored at the Union Pacific’s Steam Shops in Cheyenne.

Because of its poor mechanical condition, #3985 was officially retired from excursion service in 2020. In April 2022, Union Pacific officials announced that the company would donate the locomotive to RRHMA, which plans to restore it to operating condition. Read the complete article on the Union Pacific donation of #3985 here. 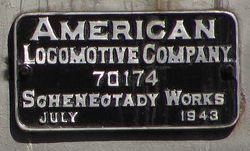